I got this finished on Wednesday. I thought it was going to have to be later, as I couldn’t find my hooks & eyes and I thought I’d have to buy another card of them. But fortunately, I looked again in the totally obvious place for them to be, where I’d already looked before, and bingo, that’s where they were. So this is officially an October make, and I’ll have to get something else made for my November one.

So I now present to you, the Counterintuitive Black Bird Skirt:

What I love about this skirt? The birds, of course! But also the little secret pop of lime green hem binding. 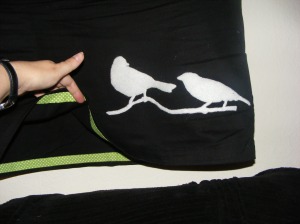 I did have a slightly senior moment when I panicked that I didn’t have any lime green thread to sew it on, but then slapped my own forehead with a great big “Duh!”, because of course it was black thread I needed, because otherwise the green might show through to the right side of the skirt. I also like that I was making it from stash, albeit stash I haven’t had very long!

What don’t I love so much? My zip is not brilliant- I think I may have mentioned that before? The top of it is a bit off but feh! it’s good enough. Also, I could have planned ahead a bit better, and used the same binding throughout, for design consistency. But I was using what I had available, so I’m not going to feel bad about that either. I’m being very forgiving on myself with this one!

As I said in an earlier post, with this skirt I haven’t done anything new that I’d never tried before. It was intended to be a relatively quick and easy make, which it was. It means I’ve managed to keep to a basic one-garment-per-month schedule, which I’m happy with. It doesn’t sound all that productive, but it’s not a race, and I’ve been making things which have incorporated a fair bit of detailed decoration, that takes time, so I’m satisfied with that level of progress.

The plan is to get going on the tweal dress next. I’m not sure if it’s technically a UFO, since it served its original purpose of being a toile. But given that I always intended it to be a wearable toile, I want to carry on with it. I’ve got a bit more of an idea of what I’m going to be doing with it. Also I think I really need to get this one done before I try and make anything with the leftover teal fabric, just in case I’ve somehow mucked something up.